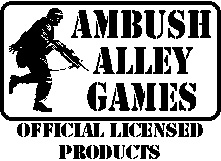 Officially licensed structures and scenery for use with Ambush Alley's Tomorrow's War.

Tomorrow's War is a miniatures war game of gritty futuristic combat, Tomorrow’s War projects the tactics and technology of today’s military conflicts hundreds of years into the future. While robot drones, anti-gravity vehicles, and advanced battle-suit technology have changed the face of warfare, the essentials of combined-arms tactics have remained constant. Using the popular Force on Force rules as a basis, Ambush Alley Games has created the most realistic and tactically challenging science fiction war game on the market.

Kits made from 1/8" (3mm) precision laser cut MDF.  MDF is a wood material that is very easy to work with and extremely durable.  MDF structures should stand up to years of gaming use.  Any adhesive that you would use with wood will work fine with MDF, for example Elmers Wood Glue.

For helpful hints on assembling and finishing MDF structures please click here for a tutorial video on YouTube.