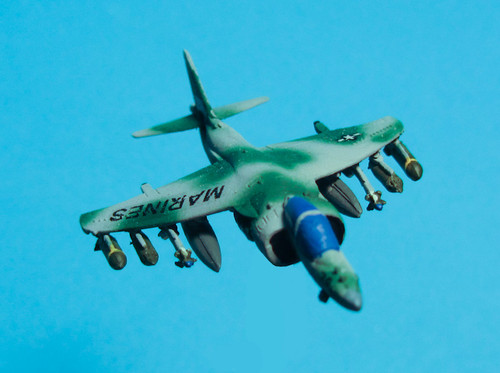 The McDonnell Douglas (now Boeing) AV-8B Harrier II is a second-generation vertical/short takeoff and landing (V/STOL) ground-attack aircraft. An Anglo-American development of the British Hawker Siddeley Harrier, the Harrier II is the final member of the Harrier family that started with the Hawker Siddeley P.1127 in the early 1960s. The AV-8B is primarily used for light attack or multi-role missions, and is typically operated from small aircraft carriers, large amphibious assault ships and simple forward operating bases. The British Aerospace Harrier II variant of the AV-8B was developed for the British military. The AV-8B is used by the United States Marine Corps (USMC), Spanish Navy and Italian Navy. The TAV-8B is a dedicated two-seat trainer version. The Harrier II and other models of the Harrier family have been called "Jump Jets".