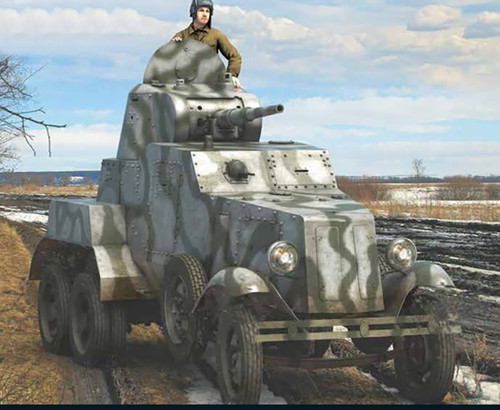 The BA-10 (Broneavtomobil 10) was an armored car developed in the Soviet Union in 1938 and produced until 1941. It was the most produced Soviet pre-1941 heavy armored car – With 3,311 built in three versions. These were the BA-10, the BA-10M (improved version with new radio), and the BA-10ZhD (equipped for dual railway/road use). The basic BA-10 design was developed from the BA-3 and BA-6 heavy armored cars. It had an improved GAZ-AAA chassis and improved armor. Like its predecessors, the BA-10 could be converted to a half-track by fitting auxiliary tracks to the rear pair of dual tandem wheels. These tracks were often fitted when the vehicle needed to move across snow or soft ground.