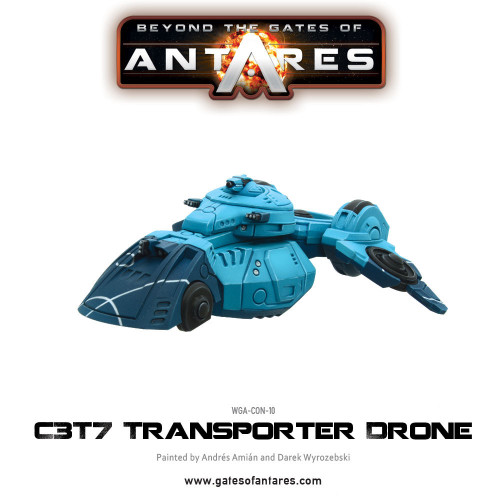 The T7 series Transporter Drone is a variant of the M4 series Combat Drone and shares most of its characteristics along with its general appearance.

It is armed with a plasma light support which also enables it to operate as a lightly armed combat drone, making it something of a universal ?ghting machine.

Its wide opening side doors give access to a cavernous interior. As it is designed to carry humans in safety its armour is a mix of kinetic shields and ?xed emission hyperlight type armour combined with a composite armoured transport shell.

You can find the C3T7 Transporter Drone comonly deployed in both Concord and Freeborn armies and the rules can be found on page 101 and pages 164 and 195 of the Beyond the Gates of Antares rule book.