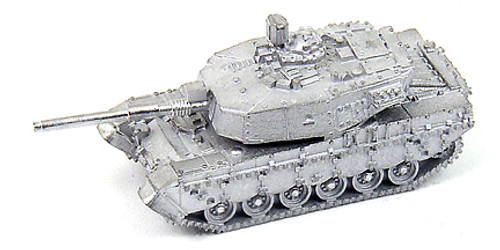 In 2003 and 2005 BAE Systems received contracts to upgrade a total of 26 South African Olifant Mk.1B main battle tanks to the Olifant Mk.2 standard. The Mk.2 uses a number of components, previously developed for the TTD. First vehicles were scheduled for delivery in 2006 - 2007.

The Olifant Mk.2 MBT is better protected than the previous vehicle. It is completed with modular armor packages. Elements of such armor can be easily replaced if damaged or when more advanced armor is available. Prototype had a wedge-shaped front turret armor, similar to that of the German Leopard 2A5.

The Olifant Mk 2 tank is armed with a fully-stabilized 105-mm rifled gun. This gun is loaded manually and fires all standard NATO 105-mm ammunition. Ammunition is stored in the turret bustle, but it does not have blow off panels. It was proposed with a 120-mm smoothbore gun, but these plans were later abandoned. This MBT is undergunned by modern standards, however is is capable of disabling any encountered opposing tank in Africa.

The Olifant Mk2 has an upgraded fire control system, which tracks a moving target automatically. This MBT also received new target detection and engagement systems. Vehicle has all-weather, day and night fighting capability. This main battle tank can engage moving targets, while on the move.

Secondary armament consists two 7.62-mm machine guns. One of them is coaxially mounted with the main gun, while another is placed on top of the roof.

The Olifant Mk.2 main battle tank has a crew of four, including commander, gunner, loader and driver.

One StoryMedium Half Timber House with attic - 10MMDF305