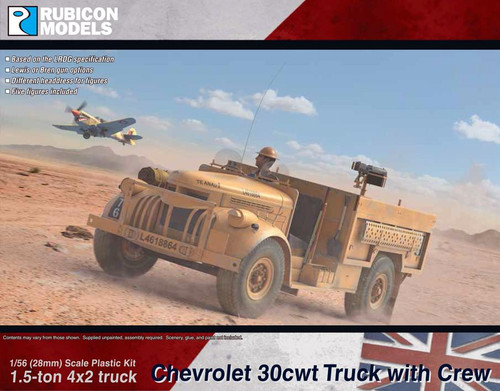 During World War 2, Canadian factories built large numbers of standardised trucks for the Commonwealth armies. These were divided into two main branches: The CMP vehicles (Canadian Military Pattern), which were made especially for military use and the MCP vehicles (Modified Conventional Pattern), which were civilian vehicles adopted for military use. Among the latter was the Chevrolet 1533x2 1.5-ton 4x2 truck, which became most famous in service with the Long Range Desert Group (LRDG) of the British Army. Heavily armed with machine guns it served in a wide variety of roles such as reconnaissance, observation of enemy movements deep within enemy territory as well as exploring attack and resupply lines for Allied troops. Named the Chevrolet 30cwt, the truck was mostly used in North Africa, but also in Italy and the Balkans.