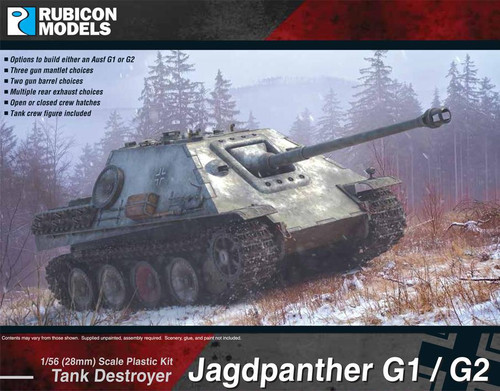 The SdKfz 173 Jagdpanther “hunting panther” was a tank destroyer built by the German army during World War II based on the chassis of the Panther tank.  It entered service in 1944 during the later stages of the war on the Eastern and Western Fronts.  The Jagdpanther combined the 8.8cm PaK 43 cannon, similar to the main gun of the Tiger II, and the armour and suspension of the Panther chassis.  The Jagdpanther had a good power-to-weight ratio and a powerful main gun, which enabled it to destroy any type of Allied tank.  Based on the existing Panther Ausf G chassis, the vehicle did not suffer too many mechanical problems.  It was manned by a crew of five: a driver, radio-operator, commander, gunner and a loader.