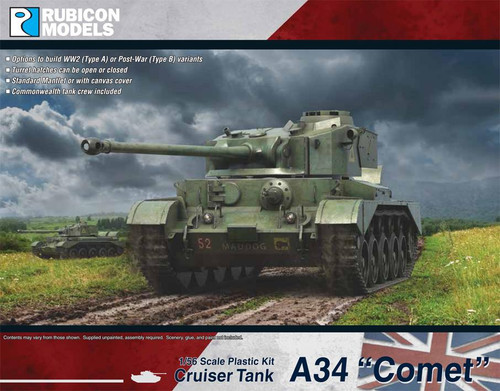 The Comet, which was a development of the Cromwell, rendered the Challenger obsolete, and led to the development of the Centurion tank. When firing APDS rounds, the 77mm HV was superior in armour penetration capability to the 75mm KwK 42 gun of the equivalent Axis tank, the Panther (which did not use APDS ammunition).
The Comet saw action in the closing stages of World War II and remained in British service until 1958. In some cases, Comets sold to other countries continued to operate into the 1980s.


Product Highlights:
- Options to build WW2 (Type A) or Post-War (Type B) variants
- Turret hatches can be open or closed
- Standard Mantlet or with canvas cover
- Commonwealth tank crew included