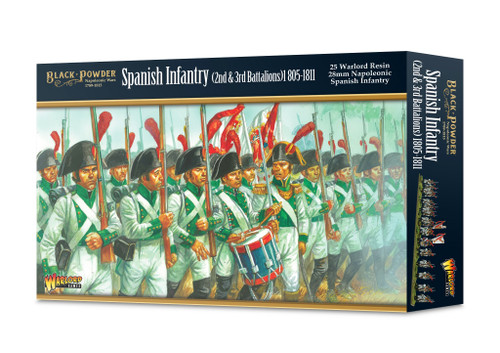 Napoleon Bonaparte's seemingly invincible French army suffered their first defeat of the Napoleonic Wars at the hands of the Spanish Army at Baylen in 1808. This was arguably the zenith of the Spanish army’s achievements during the wars.

History has not looked back favourably on the armies of Spain during the Napoleonic Wars. They suffered many defeats but also pinned down huge numbers of French troops in a vicious war that sapped the strength of innumerable French units only too glad to leave a country where they were so hated. Although the vicious Spanish guerrillas wreaked havoc upon their French foes the Spanish regulars also caused thousands of casualties on their home soil.

Most regiments had two battalions – second and third battalions were composed entirely of fusiliers carrying the distinctive Sencilla (or Ordenanza) white flag with red bourbon saltire. We know many gamers like to field two flags in a battalion no matter what history says so we’ve included two ensign figures. If you are more historically minded, we’ve added an extra fusilier (Shhh, don’t tell the boss…) free of charge!

A Spanish army looks terrific on the tabletop, and though generally of poor quality, quantity has a quality of its own, and the Spanish troops improved in the war. So, ensure your units have been blessed by the priest before leading them to drive out Boney’s hated invaders from mother Spain!

These high quality single piece miniatures are cast in our high quality Warlord Resin, ensuring a quick turnaround from assembly to tabletop battlefield. A full-colour flag sheet is also included with Sencilla/Ordenanza for the following regiments: