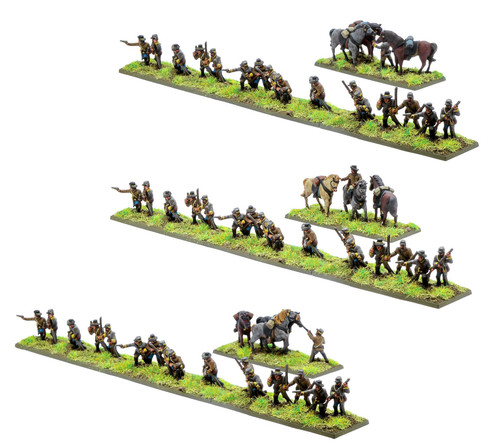 The role of Cavalry during the American Civil War went through a peculiar evolution. The realities of the evolving battlefield required a change from the tactics of previous wars. A headlong charge into formed enemy infantry or artillery became an unnecessary risk, the firepower they wielded more than enough to prevent any such charge from hitting home. Cavalry thus fought differently in the civil war than previous conflicts, though their role was no less pivotal. Headlong cavalry charges were largely replaced by cavalrymen acting more as dragoons - mounted infantry.

This set provides a brigade of three regiments - each with three stands of dismounted infantry and one of horseholders, suitable for both Union and Confederate Armies.