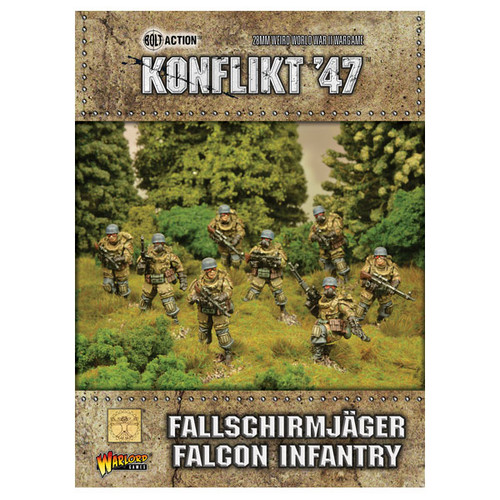 The Fallschirmjäger were famed from the beginning of WW2 for their involvement in capturing Belgium, the Netherlands and France. Though nearly decimated in courageous actions in Afrika, the Mediterranean, Italy, Northern Europe and Russia their early success have not been forgotten!

Now they are seen again across the battlefields of 1947; re-fitted with state-of-the-art Falcon armour, it is far more agile than its predecessor shaping more to the Fallschirmjagers needs. More expensive to produce but far more valuable with its effectiveness and more popular with the troops that use it.

Quick and resilient, these troops are ideal objective grabbers and shock-troops. With the ability to keep up with. and even outpace, most vehicles. Without the hindrance of terrain you can guarantee they can get to their target double-time. Equipped with assault rifles, they can pack-a-punch and wipe out those bothersome back-line units with ease.