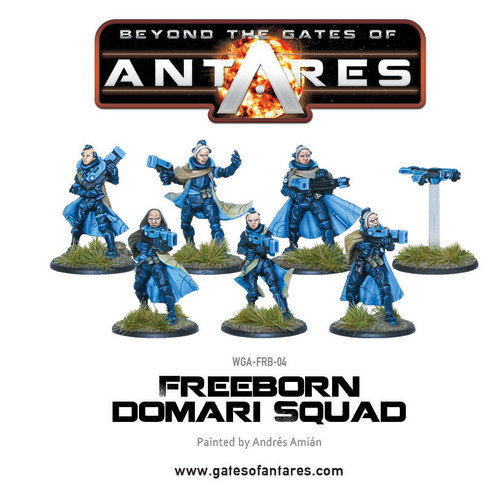 The Freeborn are the traders, raiders, explorers and the ultimate go-betweens of Antarean space. The Freeborn are divided into hundreds of independent space-borne Vardos, each ruled over by a noble family. These rulers are the first amongst an aristocracy that vies for power, riches and influence within their own society as well as amongst the multitudinous civilisations around them.

Of the many commodities in which the Freeborn trade, the most famous of all are mercenaries. The opportunity to fight as mercenaries represents a long and profitable tradition amongst the ordinary people of the Vardo. To many worlds of Antarean space they are little more than pirates: to others they are saviours and liberators. When called upon they flock to join the ranks. Many a Freeborn family fortune has been built upon the plunder of war and the rewards of victory.

Domari – or Household troops – make up the bulk of the Freeborn forces. They are recruited amongst the lower orders of free citizens. Troopers are often equipped at their own expense, or that of their family, so the appearance and quality of their clothing and weaponry can vary. Reflex armour fields are embedded into a body-hugging combat undersuit. Other clothing is characteristically styled to be loose and flowing – a fashion that is universally favoured amongst the Freeborn.

The majority of troopers carry mag weapons because they are practical and durable. Squads also have an X-launcher capable of hurling explosive shot to dislodge enemies from cover.