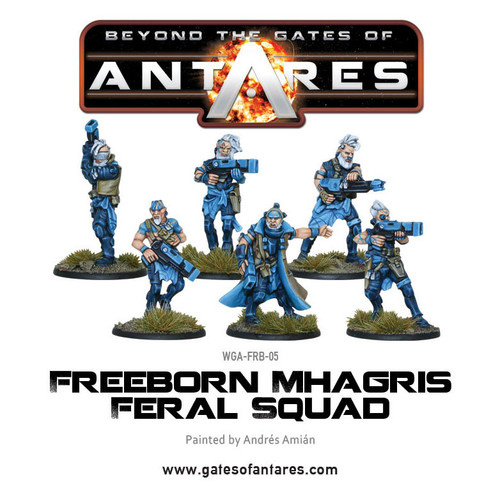 The Freeborn are great merchants, travelling between worlds and civilisations, exploring for new worlds and races, and always looking out for new opportunities to rise in wealth and power amongst the peoples of Antarean space. And power itself is a commodity that they are more than willing to trade!

The Freeborn can supply weapons and technology to those who have need of it – or complete armies and fleets if the price is right! From a small continent of fighters to vast hordes – the Freeborn can facilitate the dreams of any would-be conqueror, or perhaps fulfil the desperate need of those faced with annihilation by forces beyond their power to resist.

To ensure a continuous supply of troops the Freeborn recruit savages from feral, degenerate or primitive worlds before training and equipping them ready for sale to the customer.

The Feral squad is typical of these war-like savages. They are armed with relatively simple and cheaply made mag weapons that spray splinters of metal at their target. Each squad includes a magnetic X-launcher, which can hurl shot over the heads of enemies and drive targets from cover.

Feral troops wear a version of the typical Freeborn undersuit. In their case this often a second-hand or surplus example, and many troopers cut down their suits to afford more freedom of movement. It is very common for these degenerates to wear tribal marking, warpaint, or primitive decorations that hark back to their savage origins.