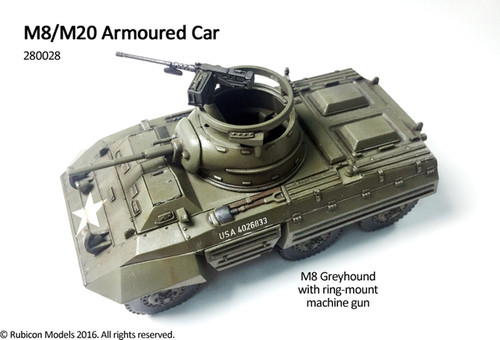 The M8 Light Armoured Car, the “Greyhound”, entered combat service with the Allies in 1943.  It was purpose designed to serve as the primary basic command and communication combat vehicle of the US Cavalry Reconnaissance Troops.  The M8 first saw action in Italy in 1943 and was used by the US Army both in Europe and in the Far East.  In the latter theatre, it was used mostly on Okinawa and the Philippines, and was occasionally employed in tank destroyer role as most of the Japanese armour was vulnerable to its 37 mm gun.  Between March 1943 and June 1945, a total of 8,523 units were built.