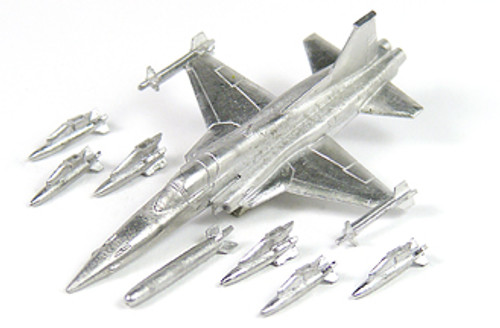 The Northrop F-5A/B Freedom Fighter and the F-5E/F Tiger II are part of a family of light supersonic fighter aircraft, first designed by Northrop Corporation in the late 1950s. Being smaller and simpler than contemporary aircraft such as the McDonnell Douglas F-4 Phantom II, the F-5 cost significantly less both to procure and operate while maintaining high performance, making it popular on the export market. Though it was not procured in volume by the United States and thus has only a limited U.S. combat record, it was perhaps the most effective U.S. air-to-air fighter in the 1960s and early 1970s. In combat its small visual and radar cross section size and consequent detection difficulty often conferred the F-5 the advantage of surprise. The aircraft also has a high sortie rate, low accident rate, high maneuverability, and a combination of both 20mm cannon and heat seeking missile armament. The flying qualities of the F-5 are often highly rated, comparable to the North American F-86 Sabre and the General Dynamics F-16 Fighting Falcon. Fiscally, the F-5 is reportedly unmatched among supersonic fighters, a contributing factor to its long service life.