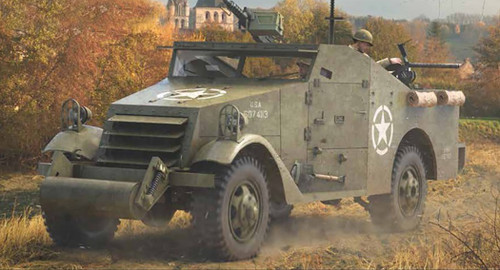 The M3A1 Scout Car (also known as the White Scout Car in British Commonwealth service) was an American-produced armoured car that saw wide service during WW2 and beyond. The M3A1 Scout Car was a machine gun armed lightly armoured open topped four-wheel drive vehicle designed to be used in a reconnaissance role. The vehicle was crewed by a driver and commander, while there was seating for six additional occupants in the rear.

The M3A1 Scout Car was typically armed with a .50 cal M2 Browning HMG and one or two .30 cal M1917 Browning HMG (early variant) or M1919 Browning MMG (late variant). All were mounted on a skate rail upon which the pintle mounts could be moved. Due to its open top, the occupants were also able to employ their personal weapons.