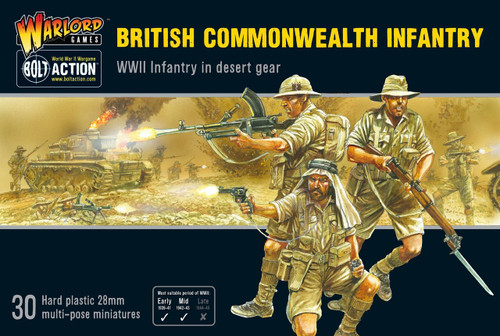 The British Commonwealth infantryman was a fearsome opponent whether facing the German Afrika Korps or the Italian Army, whether it be in the parched desert of North Africa or in beautiful yet rugged terrain Italy. This box of highly detailed plastic miniatures allows you to build slouch-hatted Australians, South Africans wearing sun helmets or the men of the Long Range Desert Group, Special Air Service and Special Boat Service.

The special forces of the LRDG, SAS and SBS were an eclectic mix of largely non-conformist characters as befits the vital roles they played in the war. As such their attire was a mix of that of their parent unit, national pride or personal preference!