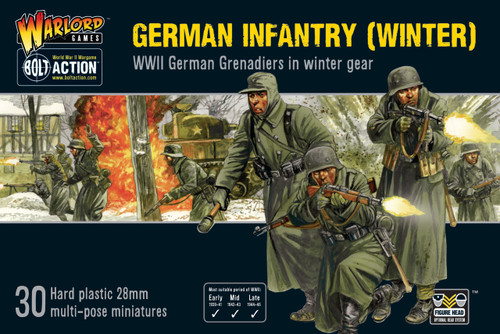 Germany’s aggressive campaigns across the world ensured his troops would face the enemy in all environments and climates. None were more unforgiving than the harsh winters on the Eastern Front or in the Italian hills and mountains.

The resourceful German landser (common soldiers) often had to make do with little more than their standard issue woollen greatcoat, gloves, scarves and a steely determination to not only stave off the cold, but also be able to fight and win.

These highly detailed plastic figures are ideal to represent German Infantry (Winter) – be they Heer or Waffen-SS – facing the enemy in cold weather or in the very depths of the bitter winter snows. Weapons, equipment and headgear options allow you to build the figures for all periods of the war from the Blitzkrieg operations of 1939 and 1940 right through to the death throes of the Third Reich in Berlin during 1945.