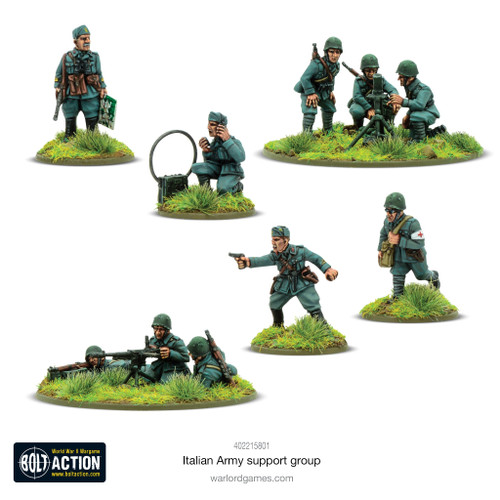 One of the largest ground forces of the war, the Regio Esercito (Royal Italian Army) was hardened by its experiences in Albania, Ethiopia and the Spanish Civil War prior to its entry to the Second World War.

The Italian Army fielded a wide range of weapons from various manufacturers. The most successful and commonly used machine gun was the Breda M37 8mm air-cooled weapon, its reputation led to it being fielded by the British SAS when captured.

Like so many nations, the Italian Army made good use of mortars such as the Mortaio da 81/14 Modello 35 which was nearly identical to the 81mm mortar fielded by the United States.

Contains the following metal miniatures which can be fielded as Italian Army or Blackshirt troops: