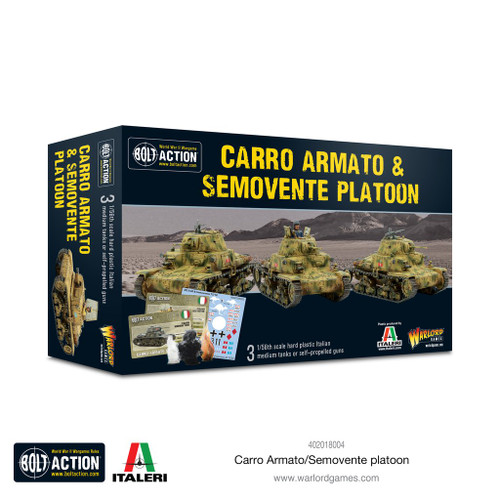 The most widely produced Italian tank of the war, the M13/40 battled on in the Western Desert and Italy despite Allied tanks far eclipsing it in firepower, speed and protection.

This superb plastic kit can alternatively be assembled as a Semovente Platoon. The Semovente 75/18 self-propelled gun brings some much needed armoured reinforcements to Italian forces.

The Semovente was an Italian self-propelled gun, built by mounting the 75mm Obice da 75/18 modello 34 mountain gun on the chassis of a M13/40 or M14/41 tank. It had riveted steel plates, which were thicker but also less sloped than in the original tank. Frontal armour was almost vertical, but it consisted of two plates rather than a single layer, which improved stopping power.