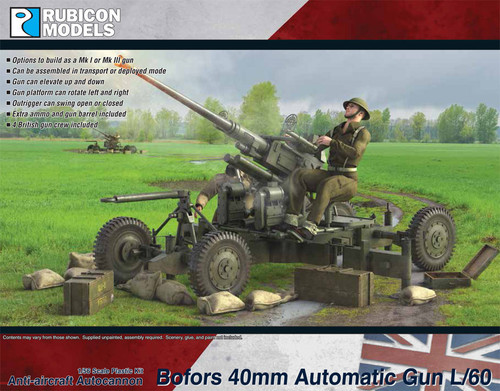 The Bofors 40mm Automatic Gun L/60 (often referred to simply as the Bofors 40mm gun and the Bofors gun) is an anti-aircraft autocannon, designed in the 1930s by the Swedish arms manufacturer AB Bofors. The gun was designed as an intermediate anti-aircraft gun, filling the gap between fast firing close-range small calibre anti-aircraft guns and slower firing long-range high calibre anti-aircraft guns, a role which previously was filled by older outdated guns. The Bofors 40mm L/60 was for its time perfectly suited for this role and outperformed competing designs in the years leading up to World War II in both effectiveness and reliability. It entered the export market around 1932 and was in service with 18 countries by 1939. Throughout World War II it became one of the most popular and widespread medium-weight anti-aircraft guns. It was used by the majority of the western Allies and some Axis powers such as Nazi Germany and Hungary. In the post-war era, the Bofors 40 mm L/60 design was not suitable for action against jet-powered aircraft, so Bofors developed a new 40mm replacement design with significantly more power the Bofors 40 mm Automatic Gun L/70, also known under the generic name Bofors 40mm gun which was adopted by many nations during the Cold War and was selected as NATO-standard in November 1953. The Bofors 40 mm L/60 would however continue to see service long after becoming obsolete as an anti-aircraft weapon due to the massive number of surplus guns from WWII, and a small number of Bofors 40 mm L/60 guns remain in service today. Some weapons saw action as late as the Gulf War and Yugoslav Wars. Over 60,000 units were produced up to the present day.