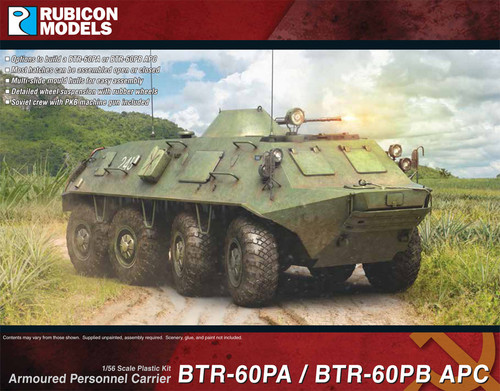 The BTR-60 is the first vehicle in a series of Soviet eight-wheeled armoured personnel carriers (APCs). It was developed in the late 1950s as a replacement for the BTR-152 and was seen in public for the first time in 1961. BTR stands for Bronetransporter, literally armoured transporter). The BTR-152 and BTR-40, the first two Soviet mass-produced APCs developed after the Second World War, gave the Soviet Army useful experience with wheeled armoured personnel carriers. However, even as they were designed, they were not suited for the needs of the Soviet Army as they lacked a roof (which was added in later versions designated BTR-152K and BTR-40B respectively). The low combat values of the BTR-152 and BTR-40 were exposed when the Egyptian Army used them during the Suez Crisis and also when the Soviet Army used them in the fighting on the streets of Budapest during the Hungarian Revolution of 1956. These were among the reasons why the new APC was developed. Between 1956 and 1957, a decision was made to convert all rifle and mechanized divisions into motor rifle divisions and a requirement for a new transport vehicle was drawn up. Development proceeded along two paths: a more expensive vehicle that would eventually become the BMP-1, for use in tank divisions, and a cheaper vehicle for use in motor rifle divisions, that would eventually become the BTR-60. BTR-60P had open-roofed crew and troop compartments, which was deemed to be a serious disadvantage. Accordingly, a new version with an armoured roof, designated BTR-60PA, entered production in 1963. This new versions capacity was reduced from 16 soldiers to 14 soldiers. The appearance of the German HS.30 APC, which was armed with a 20mm cannon, prompted the addition of the conical BPU-1 turret. This turret, which was originally developed for the BRDM-2 amphibious armoured scout car, was armed with the KPVT 14.5mm heavy machine gun and a PKT 7.62mm tank machine gun. The new vehicle was designated the BTR-60PAI and entered production in 1965. It was, however, quickly replaced by the BTR-60PB, which had a better sighting system for the machine guns. In total, around 25,000 units were produced in the Soviet Union between 1960 and 1976, and 1,878 units in Romania between 1970 and 1990.