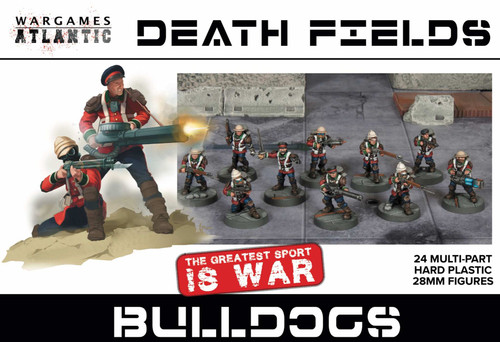 In the far future, there are many suns that never set on the British Empire or at least on the Imperial sons and daughters that make up the Bulldogs team. One of the stars of the Death Fields Circuit, the Bulldogs is a combined team formed from abductees taken from the shadow of Isandlwana, the banks of the Somme, and the streets of Arnhem. This box set includes enough parts to build 24 hard plastic soldiers that can be equipped with standard infantry rifles, light machine guns, assault rifles, plasma and flame weapons, grenade launchers, and pistols. Four headgear choices allow you to customize your forces. Models require assembly and painting. Bases are not included. Product contents may vary from photos.