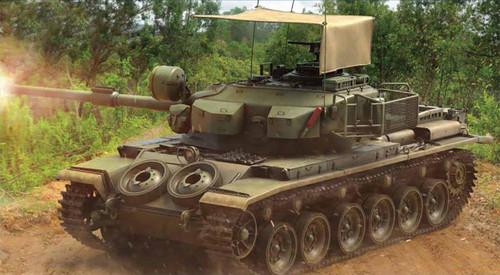 The Centurion was the primary British army main battle tank of the post-World War II period.  Introduced in 1945, it was widely considered to be one of the most successful post-war tank designs, remaining in production into the 1960s, and seeing combat in the front lines into the 1980s.  The chassis was also adapted for several other roles, and these have remained in service to this day.

Development of the Centurion began in 1943 with manufacture beginning in January 1945.  Six prototypes arrived in Belgium less than a month after the war in Europe ended in May 1945.  It first entered combat with the British Army in the Korean War in 1950, in support of the UN forces.

Product Highlights:
- Option to build either an Mk 5 or Mk 5/1 variant
- All hatches can be open or closed
- With or without side skirts
- Optional dozer blade included
- Options for Post-WW2 or the Vietnam War
- Tank commander included