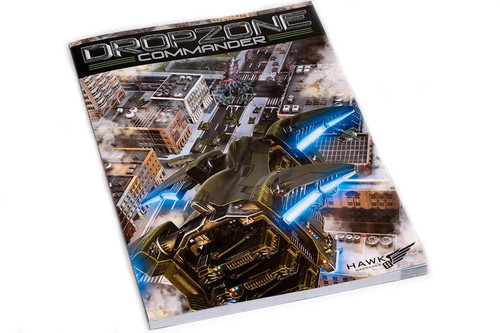 REVISED 1.1 EDITION INFO:
We've sold our entire first print run of Dropzone Commander and have just taken delivery of our new, revised 1.1 edition. First off - it's important to note that this does NOT make the original rulebook redundant. Most of the changes featured have already been released online some time ago and further rules revisions are available to download now. That being said, we have taken this opportunity to act on feedback from our fans and reviewers to make a few more minor adjustments to the book and the rules, which are as follows:

A) All current Errata, rules changes and most of the Clarifications have been incorporated into the revised edition.

B) We've made some changes to points costs etc. These are available to download, but in general terms, gunships and special forces are now cheaper in points, and some smaller weapons, upgrade costs and scenarios have been slightly modified.

D) Text is now further from the spine away from the centre of the book to increase readability, and the blue 'Rules' margin colour has now been split into three distinct shades for Background, Rules and Scenarios.

E) Paper quality is improved, with a totally uniform laminate texture throughout.

F) Rules for our recent releases (e.g. the Ferrum, Hades, Firedrake, Annihilator etc) are NOT featured in the revised edition. They will be printed in our expansions of Dropzone Commander - Reconquest: Phase 1 and Reconquest: Phase 2