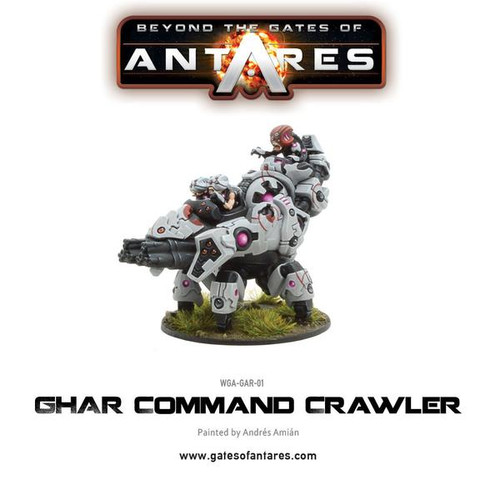 The Command Crawler is a multi-legged vehicle designed to carry a Ghar Commander into battle. Like other Ghar machines it is a primitive affair that is powered by a volatile plasma reactor. The reactor’s exposed magnetic feed lines bathe the machine and its occupants in an eerie blue glow – a radiance that the Crawler’s crew continue to enjoy for some hours after leaving the vehicle.

The Crawler’s primary role is to allow its Commander to direct battlefield operations from behind the safety of the vehicle’s heavy metallic armoured shells and ancillary magnetic shielding that protects the open crew compartments.

However, Ghar communications are primitive and uncertain (not least due to radiation from the plasma reactor), often Commanders find themselves caught up in the fighting so they have to carry suitable armaments. The Command Crawler is heavily armed, carrying two Scourer Cannons each capable of shooting concentrated bursts of plasma at armoured enemies, scattering plasma widely over dispersed targets, and shooting space-warping disruptor bombs using super-heated steam generated by mixing water with raw plasma. Effective weaponry, if somewhat hazardous to all and sundry.