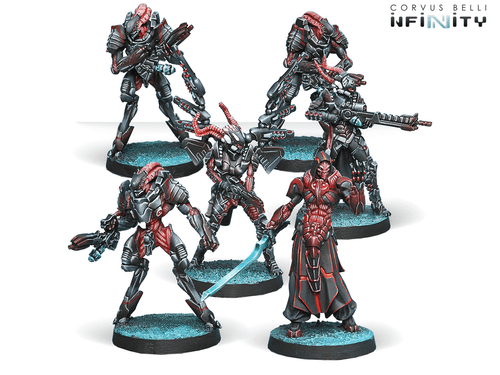 Yes, we call it new release because this new Starter pack goes beyond the re-sculpt of the old one, as it is a totally new and different one! This new Combined Army Starter Pack is composed by absolute new units taken from the Infinity 3rd Edition book. In this box you will find: 3 Unidron Batdroids with Plasma Carbines, loyal and trustable REM troops; 1 Maakrep Sniper, a hunter-killer from the Sygmaa, the Tohaa aliens who fights for the EI; 1 Fraacta jump trooper, a Sygmaa parachutist with a symbiont gear which provides her the Transmutation Special Skill; and an Umbra Legate, as lethal as mysterious martial artists who are the second in command of the Evolved Intelligence. Get ready for the arrival of the reinforcements for the Combined Army, we are sure the Human Sphere is not!