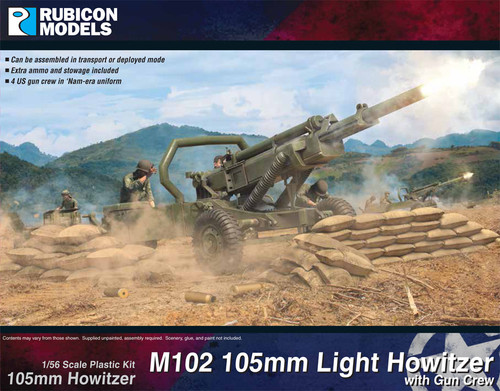 The M102 is a light, towable 105mm howitzer used by the United States Army in the Vietnam War, the First Gulf War, and the Iraq War. The M102 105mm howitzer is used in air mobile (helicopter), attack plane, and light infantry operations. The weapon carriage is lightweight welded aluminum, mounted on a variable recoil mechanism. The weapon is manually loaded and positioned, and can be towed by a 2-ton truck or High Mobility Multipurpose Wheeled Vehicle (HMMWV), can be transported by UH-60 Black Hawk helicopters, or can be dropped by parachute with airborne units. When emplaced, the howitzers high volume of fire compensates in large measure for the lower explosive weight of the projectile compared to the Armys 155mm and 8-inch howitzers. Since 1964, the Army acquired 1,150 M102 towed howitzers. The weapon is being replaced by the M119-series 105mm howitzer. Product Highlights: - Can be assembled in transport or deployed mode - Extra ammo and stowage included - 4 US gun crew in Nam-era included