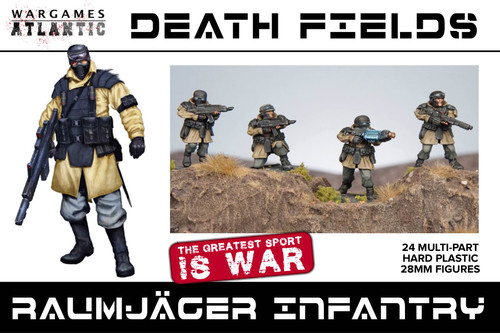 Even before they became the famed Raumjager of the Death Fields circuit, this group of human warriors were an elite German parachute unit - the Fallschirmjger. One moment they were trying to stem the tide of the Allied advance near Carentan, the next they found themselves light years from Earth - prisoners of fantastic beings with even more fantastic technologies. The men of Fallschirmjger Regiment 6, 7th Kompanie had been taken, like many of the finest warriors before them, to become gladiators in the galaxy's greatest sport: the sport of war. This hard plastic box set includes enough parts to build 24 infantry and features standard laser rifles, heavy machine guns, flamethrowers, and advanced plasma weapons.