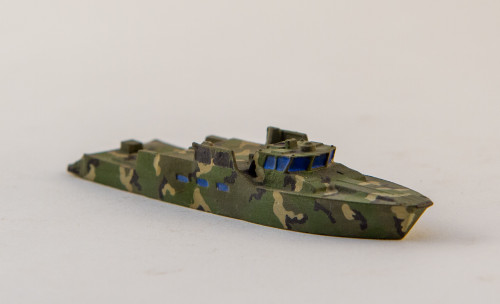 Stridsbåt 90 H (Strb 90 H, literally: Combat Boat 90 Half; the 90 refers to the year of acceptance and Half refers to the fact that it can carry and deploy a half platoon of amphibious infantry (18 men fully equipped) is a class of fast military assault craft originally developed for the Swedish Navy by Dockstavarvet. In addition to the many variants in service with the Swedish Navy under the "Stridsbåt 90H" designation, the CB 90 has been adopted by the navies of several countries, including Norway (as the S90N), Greece, Mexico (as the CB 90 HMN), the United States (as the Riverine Command Boat) and Malaysia. Also the German Navy plans to equip the Berlin-class replenishment ships with the CB90.

The CB90 is an exceptionally fast and agile boat that can execute extremely sharp turns at high speed, decelerate from top speed to a full stop in 2.5 boat lengths, and adjust both its pitch and roll angle while under way. Its light weight, shallow draught, and twin water jets allow it to operate at speeds of up to 40 knots (74 km/h) in shallow coastal waters. The water jets are partially ducted, which, along with underwater control surfaces similar to a submarine's diving planes, gives the CB90 its manoeuvrability.

Machine guns are not part of the kit.  There is a large variety of weapons that can be deployed on this craft, 7.62 machine guns, .50 cal machines and others.  Therefore I've left that up to the the customer to dig into thier spare parts box and select the guns they want to attach.  There are two mounting points on the sides of the craft and one on top of the bridge.