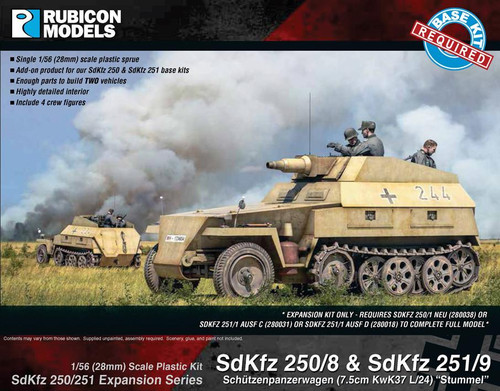 The SdKfz 251/9, also called “kanonenwagen”, was equipped with a short-barrel 75mm (2.95 in) howitzer, which used the same mounting as the StuG III. It was nicknamed “Stummel” (Stump), and committed in great numbers on the Eastern Front. First ordered in a March 1942 specification, Büssing-NAG delivered two prototypes in June, tested in Russia. A first batch of 150 vehicles was delivered during the following months, based on the Ausf C. By late 1944, a major modification included a revised modular higher gun-mount with a coaxial MG42 for close defense. This modular version was sometimes called “Kanone 51” and was also used to create the SdKfz 250/8 and the SdKfz 234/3.

The latter design gave better protection, better depression and higher traverse (20° on each side). Normal traverse was 10 to 12° on each side, and a -5 +20° elevation. The gun provision was 52 rounds, but many were carried wherever it was possible, notably on the rifle racks and crammed in extra soft bags. Scissor binoculars and relocated a Fuspr.f 2 meter rod-antenna were also present. The Stummel was first introduced with the SS-Panzerregiment 4 “Der Führer”, 2nd SS Armored Division and, later, (after the Ausf D came into service in 1944) in most armored reconnaissance units, and the paratrooper division “Hermann Göring”. Such vehicles could be carried inside the Me323 “Gigant”.

The SdKfz 250/8 was the standard SPG variant, carrying the short barrel 75mm (2.95 in) KwK37 L/24 howitzer and, later, a K51(Sf) with 20 rounds in store. Production was planned in the spring of 1943 with the Alte chassis (but never produced), and then switched to the Neu chassis in 1944 when actual production begun.