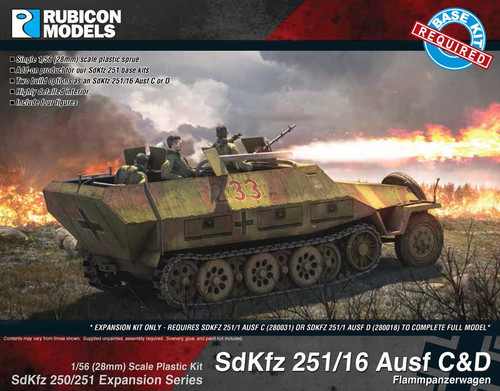 The SdKfz 251/16 (based on the SdKfz 251/1) was fitted with two flame projectors and initially a rear mounted flamethrower (Ausf C only), detachable but still connected to the vehicle, to be operated by dismounted infantry. This was in addition to the standard forward machine gun mount.

Six SdKfz 251/16 Flammpanzerwagens were authorised for issue to each Panzergrenadier regiment or in the Pioneer battalion. Though vulnerable, they were used very successfully at night to quickly attack enemy infantry who had just captured German trenches, hitting the enemy before they could consolidate and bring up the heavy weapons that would make them much costlier to defeat later.