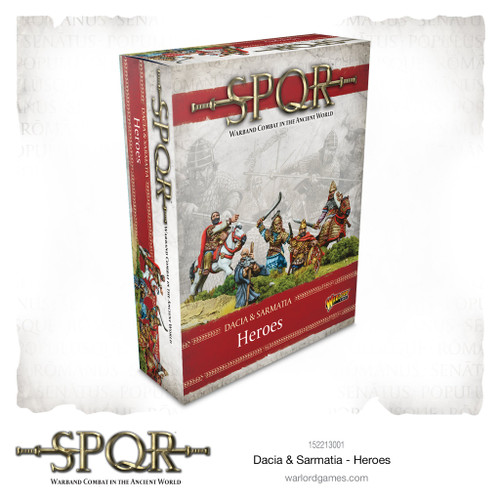 Whether from Dacia or Sarmatia, a hero that leads a Dacia & Sarmatia Warband is a renowned warrior and a veteran of many battles. Dacian Heroes know the value of fortifications, and prolonged wars against Rome by retreating to fortified places. Sarmatian Heroes are prone to pick fights whatever the odds. This can lead to differences of opinion among Dacian and Sarmatian commanders.

In addition to providing a generic Dacian hero on foot and a generic mounted Sarmatian hero, this box set contains Dacian King Decebalus, both on foot and mounted. As king of Dacia, Decebalus (the ‘Brave’) roused his people to consistently thwart Roman attempts to conquer his nation. Allying with the horsemen of Sarmatia, he proved to be a constant thorn in the side of two emperors and even forced the Emperor Trajan to peaceful terms – for a while.