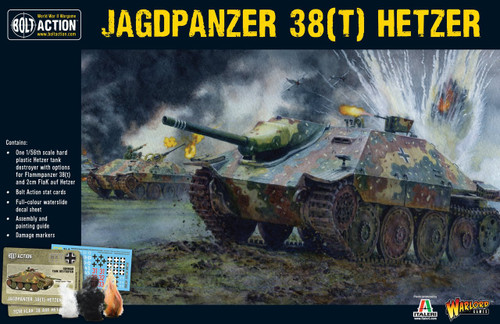 Based on the reliable Czechoslovakian Panzer 38(t) chassis, almost 3,000 of Hetzers (Baiters) were built by the war’s end. Their small size and very low profile gave them distinct advantages in the role of tank hunters.

In addition, the Hetzer wasn’t hampered by the mechanical problems associated with the larger tank destroyers such as the Jagdpanther and Jagdtiger, nor did it have the unprotected fighting compartment of the Nashorn or Marder tank hunters. plus its remote control roof machine gun gave it good close defence capability.

Hetzers equipped many Waffen-SS and Wehrmacht (even the Luftwaffe and Kriegsmarine) formations, seeing action on all fronts on which Germany fought as well as with the Hungarian army. The first Hetzers entered service with 731st and 743rd Heeres Panzerjäger Abteilung in May/June of 1944.