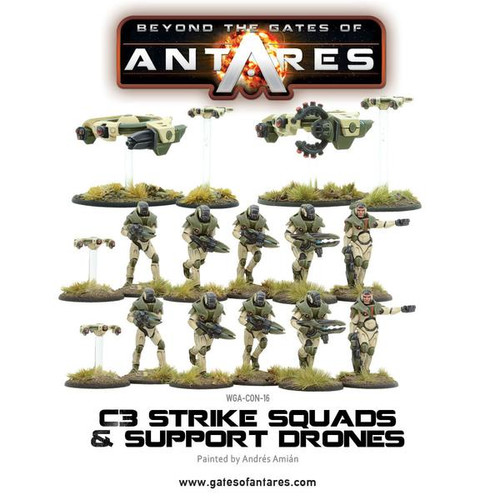 Strike Squads form the core of the Concord Combined Command’s armed forces wherever they are deployed. Strike Troopers are amongst the best-equipped fighters in all of Antarean space. They carry multi-function plasma carbines capable of punching a hole through most armour or shooting rapid bursts of deadly plasma bolts. Strike Troopers are protected by invisible hyperlight armour suspended from the nano-cored casing of their battle suits. This advanced armour provides complete atmospheric isolation as well as effective shielding against enemy weapons. Strike units are often accompanied by small buddy drones, such as spotter drones that act as the unit’s ‘eye in the sky’ feeding vital targeting information into the squad’s sophisticated combat shard.

Beyond the Gates of Antares Templates